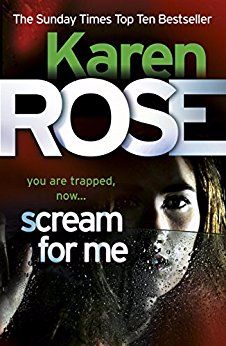 Karen Rose is a RITA award winning novelist who has been writing since her debut book `Don’t Tell’ in 2003. Karen Rose then produced a series of books starting with Die For Me which was released in 2007. The series feature Special Agent Daniel Vartanian. This book is the second in the Series and is entitled `Scream For Me’.

I have only read one other Karen Rose book which was her debut novel and I was thoroughly captured by her writing style and thoroughly enjoyed every page of that book. When I picked up this one I was totally unaware that it was the second in the series but this had absolutely no effect on the enjoyment as previous events are explained in detail. If you wish to read from the beginning of this series I would suggest you don’t read onwards from this point as there may be spoilers relating to the first book.

In this second instalment we again meet Daniel who has recently buried his parents following their brutal killings at the hands of his own brother. Not only does he have that to deal with, but the fact that his brother Simon died at his own hands too. When a new case lands on his desk he is determined to absorb himself in this new case and catch the killer that seems to be replicating murders from 13 years ago. The problem with that is that the murders seem to be linked to a collection of photographs that belonged to his brother.

Alex Fallon is an ER nurse and is getting over the breakup of her relationship with a fellow Doctor. Alex has a murky past with her twin sister having been murdered thirteen years ago. When she finds out that her stepsister Bailey has gone missing she fears the worst. However Bailey has a history of drug abuse but would her own stepsister abandon a small child alone in her house just for her next fix. Alex doesn’t want to take any chances so takes Baileys daughter Hope into her own care and begins her own search for her stepsister.

Alex and Daniel inevitably cross paths when Daniel realises there may be a link between the murders from 13 years ago, the murders that are happening now and the disappearance of Bailey Crighton. Between them they try to make sense of what is happening and why.

The proper description for this type of book genre is romantic suspense. When I reviewed Karen Rose’s previous book I totally disagreed with that label but I have to say it is more fitting to this book. The story itself is far from a bed of roses and is largely based around multiple murders of young women. However all of her books do have a romantic element running through them. I have to say though, that in this case it just became part of the story as opposed to taking over from the central focus of the book. It runs along nicely and is integrated well without becoming too over the top.

You do have to pay attention as there are many characters introduced throughout which all have a part to play somewhere along the line. This author has a knack of switching seamlessly between a horrific murder scene and a scene in which two people are falling for each other despite the circumstances. I loved the element of the story which was written from Bailey Crighton’s point of view as the story is then staggered and the reader is drawn further into the reasoning for a lot of things the further in to the book they get.

Overall I think I preferred her debut novel to this but this was still a solid 3.5 out of 5 stars. She has also introduced Daniel Vartanian’s sister Susannah along with Daniel’s friend Luke Papadopoulos who are to take a much more central role in the follow up to this book. I think Karen Rose is a great author and I look forward to reading the next installment.

One thought on “Scream For Me by Karen Rose (Atlanta #1)”