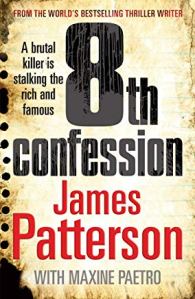 My Review – James Patterson has been writing a series of books which are part of the ‘Women’s Murder Club’ series. They involve four women who have all featured heavily in previous books. They are Lindsay, Cindy, Yuki and Claire.

The story for the 8th Confession focuses on two main threads. The first is a murder of a “saintly” homeless man and Cindy who is a journalist finds her senses telling her to keep on at this, and she is convinced there is a story there. The other thread features the serial murders of the rich society movers and shakers in the strangest manner. It appears they have all been killed by a snake bite. Lindsay and her partner Rich Conklin need to investigate the murders to find who is behind these strange killings. Yuki meanwhile is juggling her job as an attorney and falling for what she thinks is the man of her dreams.

I read this book just as quickly as other James Patterson books and found the pace pretty good but think that is down to the writing style as opposed to anything else. However I have to say I still felt that it was still a disappointment. The plot just didn’t seem to be there. It seemed to lack any substance and the four main characters that have featured in this series seem to have all changed personalities. What I loved about this series of books is that with each book you read you learn a little more about each of them. With this book, not only was the storyline lacking but so were the characters of the four women that we fans have come to know and love.

Usually the girls are brought together and fight together. This time round, you get glimpses of them all and only Lindsay and Cindy really stands out as being part of the plot line. Yuki and Claire barely get a mention. I am beginning to wonder if James Patterson has lost his touch with this series or if he is churning them out far too quickly?