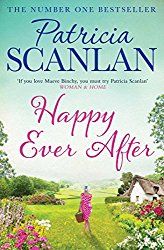 First of all Patricia Scanlan’s writing style has always been the typical Chick Lit stuff. It is usually the stuff or romance gone wrong and then hopefully going right with some tears and hopefully laughter along the way. I am a typical Chick Lit fan in that I like this particular style of writing and Patricia Scanlan has always been one of my favourite authors for this very reason. Her books have in the past always captured me and I end up feeling a sense of contentment whenever I read her books.

This particular story is a follow on from her previous novel Forgive and Forget. Having said that you could read this alone and still pick up the story from where it left off. We meet Debbie and Bryan who are newly married, and Debbie’s battle to get her new husband to stop spending his money on parties, drink and drugs.

Connie who has done her bit for her daughter and son-in-law ends up having an interesting new man turn up in her life. Could this be what she has been waiting for? Unfortunately for Connie, her ex-husband Barry has re-married to Aimee. When Aimee finds out she is pregnant and Barry realises he may well have to go through parenthood all over again seeks solace by trying to get Connie’s attention. In the meantime unbeknown to Aimee and Barry, Aimee’s daughter Mellissa from her first marriage, is silently spiralling into a world of obsessive eating disorders. Everyone suddenly want’s Connie’s attention and she wonders, can she walk away from them and let them solve their own problems for once. Or will she help them all and lose the chance at her own happiness?

Patricia Scanlan manages to cover the real topics in life such as eating disorders, relationships with your ex and love later in life without making them too disheartening. The story runs along nicely with real detail and feeling and I thoroughly enjoyed it up until the very last chapter where it felt like the author got bored of writing and just finished with a very short and sweet epilogue. Almost felt like there should have been another 5 or 6 chapters to finish it nicely. I still enjoyed the book but ended up feeling a little disappointed.